5 ALTCOINS YOU SHOULD BE BUYING 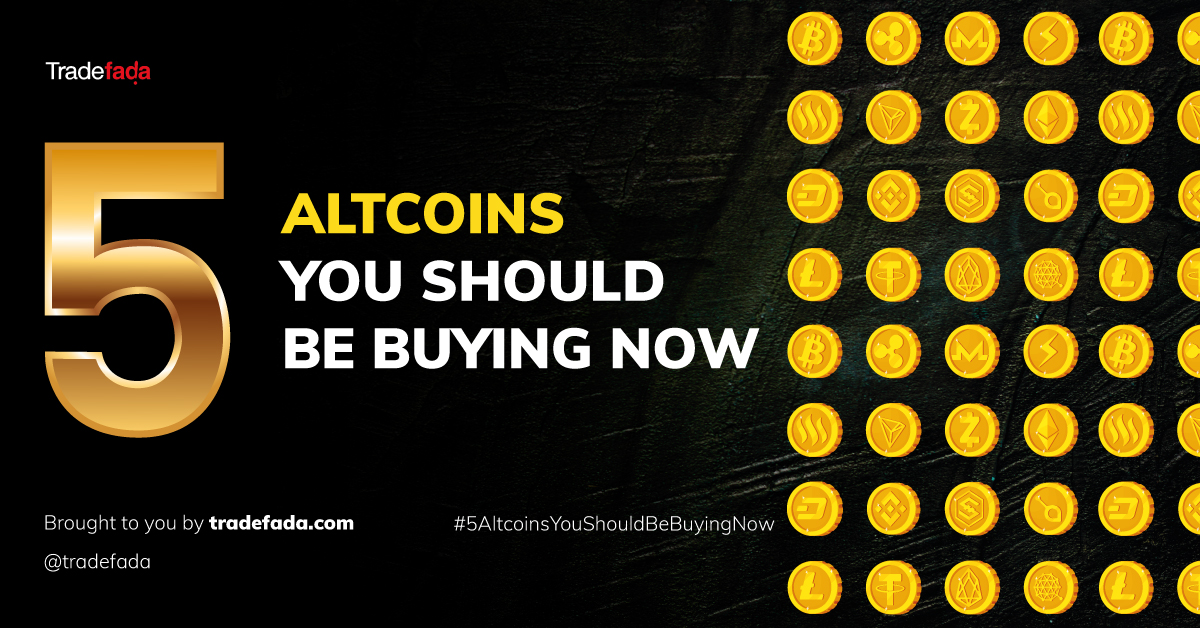 Often times, you hear about "Altcoins", and you may wonder what it is or what it means. Why and how is it different from Bitcoins? Well, cryptocurrencies launched after the success of Bitcoins are referred to as Altcoins. As the name implies, alt­­­–coins this means, they are alternative coins apart from Bitcoins. As many crypto traders know, diversifying your portfolio is a good idea, and your choice of altcoins outside Bitcoins can lead to more profits in the future, or just be a total scam. Couldn't choose the best altcoins, as there is a multitude of options to pick from.

However, if you are interested in buying the best altcoins, then you don't need to look too troubled, because, in this guide, we will like to show you some of the best altcoins you should be buying.

1.    ETHEREUM (ETH): Any list of the best altcoins you see and does not begin with ethereum is a counterfeit. Why? Because it is the most valuable cryptocurrency after Bitcoin. Bitcoin is just a digital currency, but Ethereum has a lot to offer. Ethereum substantially expanded the Bitcoin technology and its capabilities. It is more than only a currency; it is a whole network, with its own Internet browser, its own coding language and of course a payment system. Most importantly, it allows its users to create decentralized applications on Ethereum's Blockchain. This essentially cuts out the middleman and all the extra costs incurred with the involvement of a third party.

Ethereum and Bitcoin may be similar in terms of cryptocurrency aspect but so different in others. They are entirely different projects with different goals, and while Bitcoin is still the most successful cryptocurrency to date, Ethereum is a multipurpose platform with the digital currency as an additional feature.   So as you can see, these are just some of the few things that makes Ethereum peculiar attractive to both investors and even the developers.

2.    LITECOIN (LTC): This is one of the oldest cryptocurrencies in the market and shares a lot of similarities with Bitcoins. Launched in 2011, it is often referred to as the 'silver' to Bitcoin's 'gold'. Litecoin uses much of the same code as Bitcoin and therefore shares many similarities, but it is currently faster and cheaper because of the many recent improvements.

DO you even know why it is called Litecoin? It's because it's four times faster than Bitcoin. You can imagine, a Bitcoin transaction taking about 10-15mins before its completion, but a Litecoin takes only 2.5mins. So, now you can see more reason why Litecoin is more scalable as it can complete more transactions per second compared to Bitcoin.

3.    UNOBTANIUM (UNO): Unobtanium   is one of the few cryptocurrencies that are usually predictable for a long-term holding and investment, instead of using it for recurring transactions. It is merged mined with Bitcoin, leading to a protected high difficulty blockchain that is three times faster than Bitcoin. Just in case you don't know, UNO uses insufficiency and high difficulty blocks to withhold value, even in an unstable market. With the few numbers of coins guaranteeing continued high pricing regarding other altcoins. This makes sure that UNO holders maintain the worth of their UNO coins quality even if other cryptocurrencies start decreasing, little by little.

4.    DASH: This is another promising altcoin made available. It was derived from Litecoin, which is itself built on Bitcoins' technology. It has actually gained a lot of fame due to its considerable benefits over Bitcoin. For instance, it made significant development in technology and offered better confidentiality and a higher speed rate more than Bitcoin. Unlike in Bitcoin where the public address of both the sender and the receiver is made known to the masses, Dash usually keeps its own address a secret, that no one can ever track it back to the origin.

5.    BITDEGREE (BDG): This is one of the newest or latest amongst the best altcoins listed so far, which is more of a reason we can't do but mention it. With BitDegree, teachers and students can get paid. Wondering how? It's actually the world's first blockchain-powered online education channel. It was basically created with the aim to transfigure the education system. One of the ways is to provide the ability to earn while learning at the same time. You can see that's great news!

It is interesting to know that BDG is not just a cryptocurrency, but a fantastic platform which aims at making education available within your means and borderless. In other words, the motto for BDG is "LEARN AND GROW"! And we totally support that.

Now that we have come to the end of our selection of some of the best altcoins available in the market, we hope this gives you more insight into some of the best options for diversifying your portfolio in the cryptocurrency market. So far, we have been able to provide details on UNO, DASH, BDG, LITECOIN AND ETHEREUM, showing the reasons why you may want to consider buying them. Nevertheless, with the above information at hand, you should be able to pick your desired altcoins. We wish you all the best in your choice!

(UNO is now available for purchase on our platform at Tradefada.com)