BEGINNERS' GUIDE TO POLKADOT (DOT): EVERYTHING YOU SHOULD KNOW

What is Polkadot (DOT)?

Polkadot (DOT) is a piece of software that aims to incentivize a global network of computers to run a Blockchain on top of which users can launch and run their Blockchain. Due to its trustless, secure environment, Polkadot facilitates the communication between different Blockchain. Either public, permissionless networks, private consortium chains, or oracles, and other Web3 technologies, Polkadot is designed to connect and secure unique Blockchain. As a result, a network of independent Blockchain can exchange information under the protection of a security protocol.

Polkadot is a living network with governance and upgradeability as its core pillars. So, since WebAssembly operates as a "meta-protocol" in this network, network upgrades can be deployed autonomously. Furthermore, unlike network forks, Polkadot adapts to your changing needs without posing any risks. Polkadot connects these dots, laying the groundwork for a decentralized web where users are in charge of their data and not restricted by trust bounds within the network.

However, Polkadot, launched in 2020, is among the latest, presenting several novel technical features toward its aspiring goal. Polkadot got designed to operate two types of Blockchain from the outset, namely public and private. Nevertheless, these two types of Blockchain exist, a permanent network (called a relay chain) and a user-created network (known as parachains). This aids parachain transactions to benefit from the same security as the original chain transactions.

Polkadot's team states that transactions can be safeguarded and precise using only the computing resources necessary to run the main chain with this design. A user's added benefit is that they can customize many parachains for a variety of different purposes. However, this made Polkadot one of the well-funded Blockchain projects in history, having raised more than $200 million from investors in two ICOs.

Gavin Wood, a co-founder of Ethereum, and Peter Czaban and Robert Habermeier founded Polkadot in 2016. Solidity is the programming language used by developers to generate decentralized applications (dapps) on Ethereum. Wood created it. But before that, he worked at Microsoft as a research scientist.

Wood and Jutta Steiner co-founded Parity Technologies in 2015. Its goal was to implement Ethereum-based projects. These include one of two clients, used by several network nodes and other software essential to Ethereum. Polydot developers who want to create parachains quickly can now use Substrate, a software development framework maintained by Parity Technologies.

How Does The Polkadot Network Work?

Transactions on the Polkadot network are processed parallelly rather than sequentially using a sharded model called "parachains." In the network, each parachain has a unique state transition function (STF). A Relay Chain is a major chain in Polkadot. By Polkadot's design, a chain can connect to the Polkadot network as a parachain as long as its logic can be compiled into Wasm and adheres to the Relay Chain API. Before being added to the finalized chain, blocks constructed by Parachains are checked for availability and validity by validators on the Relay Chain. They do not have any security responsibilities because the Relay Chain does. As a result, the entire network kept abreast of the many transactions that take place throughout the day. 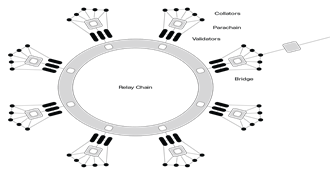 A two-way compatibility feature on bridge parachains allows Polkadot to interact with chains that use their finalization process (such as Bitcoin). The Cross-Chain Messaging Protocol (XCMP) helps parachains to send messages of any type to each other. In addition, the shared security and validation logic of the Relay Chain provides the environment for trust-free message passing that opens up true interoperability.

The DOT token has traded between $2.90 and $40.70 since its launch in August 2020. The popular exchanges trading Polkadot (DOT) are usually Tradefada, Binance, OKEx, and Houbi Global.

Where and How to buy Polkadot (DOT):

Even though Polkadot was launched less than a year ago, DOT can be purchased and traded on many popular cryptocurrency exchange platforms. These include several tier 1 exchanges, like Binance, Kraken, and Huobi Global, and close to 100 less-established exchange platforms.

Is Polkadot Worth Buying?

Polkadot (DOT) is a buy, according to Wallet Investor and several other crypto news outlets, and is worth considering in the short and long term, they claim. Even though there are several cryptocurrency platforms available, some of them are vying for supremacy, in the DeFi market, by surpassing one another. While on the other hand, Polkadot anticipates that all competing Blockchain will be together eventually, making it easier and more exciting to use the decentralized web in general. Due to DOT's interoperability, users can access different protocols, applications, and information in a short period quickly and securely. So it is called the United Nations of Blockchain.

Trading outlet Previsioni Bitcoin has forecasted DOT to end 2021 with a trade price of $166.57.

Those who are working on scaling Ethereum to create version 2.0 are also working on the Polkadot ecosystem. For example, Bitcoin's lack of customizability and Ethereum 1.0's inability to scale. Are you confident that Polkadot will be able to fulfil its vision to connect all of the world's Blockchain into one interoperable ecosystem? Polkadot's team appears to be exceptionally qualified for the task.